The Socialist Party (CWI England & Wales) collectively is grieving deeply the loss to cancer of our much-loved national treasurer, Ken Douglas (22.9.61 to 4.6.20). Since the day he joined us, over 35 years ago, Ken dedicated his life to the struggle for socialism – first in Sheffield (see below) then in London.

For the last 19 years, he worked full-time for the party, achieving his long-held goal. He was an enormous gain for the party’s team of workers, first as an editor of the Socialist, and then – since 2007 – as national treasurer and a member of our executive committee.

Ken’s ill health developed extremely rapidly. Just two months ago he was speaking at a national meeting of our full-time staff, putting forward plans to make sure our finances could withstand the Covid crisis. We adopted his proposals, and they have been vital to enabling us to be in fighting form now, ready to mobilise for and intervene in, the mass Black Lives Matter protests sweeping the country.

Even as the disease’s grip tightened, Ken remained completely himself. He was discussing world events, finance and dialectics with young Socialist Party members the day before his death.

He played a central political and organisational role in our work in countless ways. He campaigned relentlessly to improve the party’s finances, always appreciating the self-sacrifice represented in all donations from the biggest to the smallest.

In the recent period, in addition to his normal load, it was Ken who led the campaign to find new premises and raise the funds to buy them when we faced eviction from our previous rented headquarters.

Achieving that ran to the wire and, with many other pressures on the party at the time, Ken’s broad shoulders carried the heaviest part of the burden of every aspect of the move. He was the driving force of everything – from the major tasks to scrubbing our old offices clean before we handed back the keys. He then took on the possibly even more onerous task of making sure we kept our new offices in decent condition!

Ken was a determined fighter for socialism and was very firm against political attacks on our party. Personally, however, he was a kind, modest, self-effacing man who often worked with the family’s small white dog – Harry – asleep under his desk. As the many moving social-media posts show, he touched the lives of countless Socialist Party members and supporters.

At the same time as playing such an important role in the party, Ken was also an endlessly loving and dedicated father to his twins, Nancy and Lily, and was devoted to his wife, Paula Mitchell – secretary of the London Socialist Party. He fell in love with Paula virtually on meeting her and moved to London in short order to be with her.

He was so proud of all his girls. His desk and surrounding walls always featured numerous pictures of his children. Dedicated as he was to the fight for socialism, when the children were young he often felt it was more important for Paula to be able to participate in events than him, and did all he could to enable that.

On top of all these other wonderful qualities,Ken was a fantastic cook. He was known as the Paul Hollywood of the Socialist Party – partly because of a certain resemblance – but mainly because he was a truly brilliant baker.

He was also an enthusiastic camper, and many of us spent hours chatting to him, Paula and the girls at Socialist Party summer camps – for the pleasure of their company of course, but also because Ken was bound to whisk up a meal better than most of us can manage with a fully-equipped kitchen.

If you wanted to raise party funds at a social event, you only had to tell people that Ken would be on the BBQ or whipping up the pizzas to have them queuing out the door.

This obituary can only be a very inadequate attempt to describe a few of Ken’s many attributes and what he meant to us. He has been taken far too young, at only 58, and has left a gaping hole, above all for his heartbroken family, but also for the whole of the Socialist Party.

It is difficult now to imagine that there will ever be a time when we are not brought up with a sick jolt because Ken isn’t there to do all the things he did – from encouraging comrades to study dialectical and historical materialism; to leading megaphoning on Waltham Forest Socialist Party stalls; to training a new generation of finance organisers; to having a kind word with young comrades facing difficulties.

Ken himself, however, was steadfast to the end, proud that he had helped contribute to building our party, and confident that the current generation of young Socialist Party members, and those that are to come, will be capable of building a mass party that can lead the struggle to overthrow capitalism. Dedicating ourselves to that task is the best tribute we can pay him.

Ken joined Militant in his early twenties against the backdrop of the 1984 miners’ strike and the Liverpool City council struggle against Thatcher. He was inspired at an 800 strong Militant rally against the witch-hunt in the Labour Party held at Sheffield City Hall with Derek Hatton and Peter Taaffe speaking.

Alan Barrow, then a Militant branch secretary recalls: “I remember well the day me and Iris knocked on his door on Norfolk Park. We were following up on a petition he had signed on one of the Saturday paper sales on Fargate. Within a week he was at a branch meeting at our house on Manor on “why you should join Militant”. That was it, my first recruit to the organisation. In the first few weeks of knowing him, Ken made it quite clear that he wanted to work full-time for Militant.”

Ken built a big anti-poll tax union on his own estate as part of ‘Manor against the poll tax’ which filled two of the 30 coaches that went from Sheffield to the huge anti-poll tax demo in London in 1990.

But the collapse of Stalinism reinforced the Labour Party’s expulsion of Militants and shift to the right, leading to the 1991 split in Militant about our future direction. Ken was an enthusiastic supporter of the ‘open turn’, his political understanding and revolutionary determination leaving some older, conservative members behind.

In the absence of any significant workers’ struggles, and with Labour councils like Sheffield implementing big cuts to jobs and services, as Militant Labour, we turned to local campaigns and ‘standing for socialism’ in local, then parliamentary, elections.

With his name still known from the anti-poll tax union, Ken was selected as our first candidate in the 1994 council election for Park ward. As our public representative, Ken took two weeks off work, throwing himself into the campaign outside shops, schools, post offices, and knocking on hundreds of doors. A fantastic campaign resulted in 682 votes (20%) and a dozen new members in the area. 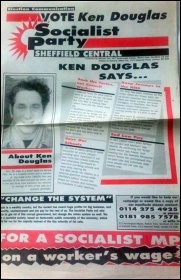 A year later, Ken was able to write in the Militant newspaper:

“We promised after that election that we weren’t going away and we haven’t. We have exposed the high-rise hell of families with children living in the 15 tower blocks on Norfolk Park when at least 50 council houses nearby were boarded up. With the slogan ‘Nice tracks, shame about the flats’ Militant Labour has contrasted the millions of pounds spent on the Supertram which runs through Norfolk Park, with the next to nothing spent on the estate itself. We tried to protest against David Curry, the Tory housing minister due to visit the ward. Our leaflets read: ‘Make it hot for Curry’, but he changed his itinerary to avoid us, making him a ‘chicken curry’.”

On the back of such energetic local campaigning, and he was never out of the Sheffield Star paper, Ken increased his vote in 1995 to 21.5%, beating the Lib-Dems to come second in the ward, and causing the Labour councillor to accuse us of being the ‘fly-posting party’.

As well as housing, we campaigned against NHS cuts, collecting tens of thousands of signatures on a petition against the closure of the Hallamshire hospital casualty department, which Ken presented to the hospital Unison union branch secretary. Then we successfully stopped plans for a Private Finance Initiative (PFI) back-door privatisation of the new Jessops women’s hospital that was eventually publicly funded.

By now, Tony Blair was the ‘New Labour’ leader, and Militant Labour changed its name to the Socialist Party. That hospital anti-PFI campaign was central to Ken standing as our Socialist Party candidate in the 1997 general election in Sheffield Central constituency, gaining nearly 500 votes and many new members.

Strengthening the branch allowed us to stand more widely in local elections, and initiate in 1998 the eventually successful Residents Against Sarp Pollution mass community campaign to close down a toxic waste site in Killamarsh near Sheffield. Again Ken was in the front line, this time literally stood in front of tankers full of dangerous chemicals!

Ken’s growth as a public representative, and as a leading Socialist Party member in Yorkshire, led him to attend a CWI international school in Belgium in 1999. There he fell in love with Paula, who quickly became his soulmate. Ken moved down to London to live with, marry, and have two beautiful twin daughters with Paula, and start a new chapter in his revolutionary life, having made such an outstanding impact in Sheffield that we still talk about it today.