The Indian government had been slowly privatising all the state banks in recent years. While canceling the debt of the super rich and changing various laws and regulations to aid the private banking system the government also continued to attack the workers’ conditions, wages, and union rights. This has resulted in a number of militant struggles by bank workers. Workers in Catholic Syrian Bank Limited (CSB) are also planning a number of actions in the coming month. What had taken place with CSB sheds light on the horrific situation that all bank workers are facing in general.

In 2018, the Mauritius based holding company of Fairfax, a Canadian corporate institution, acquired a 51% share of this bank and took over the complete control of CSB Bank. Once the ownership was transferred to the foreign corporations, all its policies became more anti-worker and pro-corporate.

It was for the first time in the history of RBI (Reserve Bank of India) and the Indian banking industry that the RBI permitted the take-over of a national bank by acquiring a majority of shares. Once they acquired full control of the bank, Fairfax appointed managers who were ready to implement their orders. They completely changed the bank, lock, stock, and barrel. They completely altered its structure and function. The name of the bank was also changed.

The running of the major departments at the head office at Thrissur was shifted to Chennai and Mumbai. In effect, they have completely changed the bank and its regulation without any consultation with the workers.

In addition, the new management is now trying to make this bank totally inaccessible to poor workers. The minimum balance for opening a savings bank account is Rs.10,000 ($135). The bank also instructed the employees to treat customers who do not maintain a balance of Rs.30,000 ($405) in their account as unprofitable. The instruction is to accept only non-interest deposits. They also completely stopped providing small loans. The bank no longer gives agricultural loans, educational loans or small business loans. Housing loan applications are redirected to HDFC Ltd for the commission they get. While educational loans are reduced, corporate lending has grown in recent years.

Treatment of the workers

The total number of permanent employees of the former  Catholic Syrian Bank is now reduced to 1,353. By resorting to intimidation, punishments, and coercive methods like the VRS/CRS schemes, they are trying to forcefully push the permanent employees out of the bank and create precarious based employees.

Until  2017, there was not a single casual or precarious employee in this bank. Now their number is 3,533. The heads of various departments, and the managers are now temporary contract employees. Misappropriations and frauds are also on the increase in this bank.

Even the small wage revision implemented in all other banks from 2017 is denied to the employees of this bank. Employees all over India are agitating against these rotten policies of the bank management.

A Threat For Future Banking Industry

The central government is vigorously following a policy of privatising the public sector banks. The CSB Bank experience shows us what will be the style of functioning of a private sector bank in the days to come. The law permits 74% of foreign equity in private banks in India. Even with 51% equity, the violations taking place in the bank and their attitude towards ordinary customers are unbearable. The CSB experience provides good lessons for workers in terms of what is to come. Local and foreign private capitalist forces are strengthening their foothold in the Indian banking sector. The developments in CSB Bank are an indicator of that. Now that the policy of the central government is also backing them. We can defeat these anti-people banking policies only through determined workers’ struggle supported by the masses. The resistance building up among CSB workers is a positive step in that direction.

The best way to resist the bank’s policies pursued by different bank managements is to build resistance by forming a joint forum of all employees in the banking sector. CSB workers are brought together under UFBU CSB {United Forum of Bank Unions – the unions under this umbrella are AIBEA (All India Bank Employees Association) AIBOC (All India Bank Officers Confederation) BEFI (Bank Employees Federation Of India) INBEF (Indian National Bank Employees Federation)} in 2021. This forum organised a strike on an all-India basis on March 26, 2021. After that, a three-day strike took place on September 29, 30, and October 1. Due to the utter disregard shown by the management towards the issues raised by the employees, the unions were forced to go for another three days strike. All the branches of CSB Bank were paralysed during this three-day strike which was held on October 20, 21, and 22. It was a historic struggle against the anti-people and anti-workers policies of the government and private bosses. Now the CSB workers should go further and mobilise solidarity amongst all bank workers. An appeal for solidarity action should be extended to workers in all other sectors and to all the unions. There should be an appeal to workers in Canada and other countries who are working for these foreign companies to take action against them. 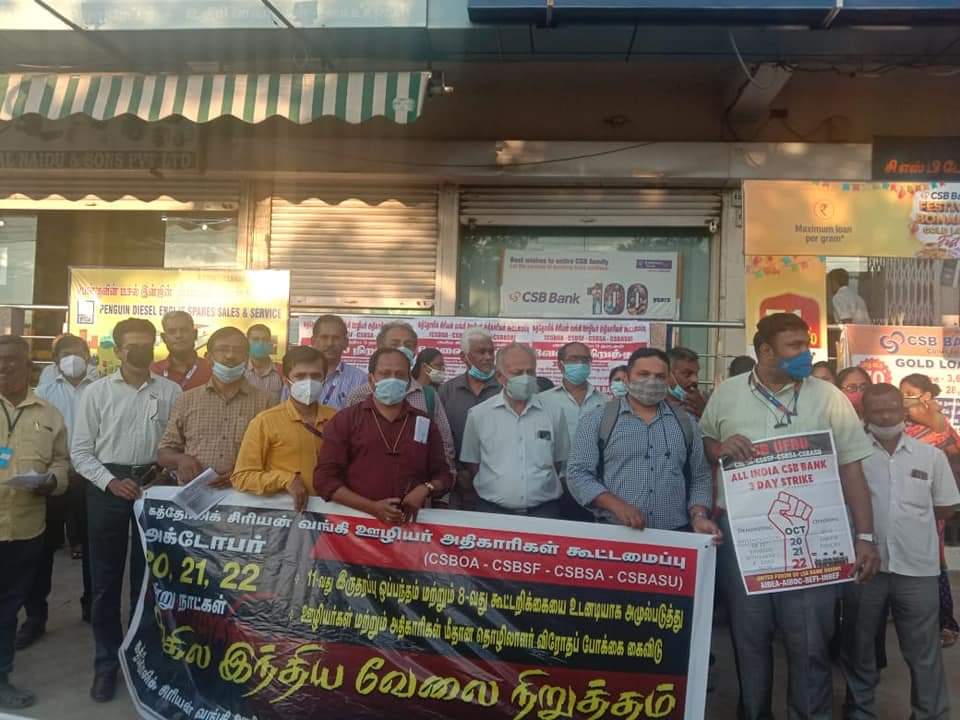 The Committee for a workers’ international (CWI) and its Indian section New Socialist Alternative fully support all the demands that are put forward by the CSB workers. These demands are:

Stop turning banking into service only for the rich!

In addition, Unions should demand re-nationalisation of the banks to bring them under the democratic control of the workers and repeal all the anti-labor laws.

The CSB workers together with their supporters are planning an international solidarity appeal for all the unions, and activists internationally to support their struggle. We will publish this appeal soon.