Workers organized in Finnish unions OAJ and JHL, and several smaller unions, concluded a nationwide rolling strike action with a week-long strike that closed schools and disrupted municipal services across the country from 3 to 9 May. The first national strike in 38 years for teachers, the core issue of the complex dispute was pay, as public sector workers sought to catch up to the private sector following years of low raises.

Nurses meanwhile, organized in the unions, Tehy and SuPer, continued their dispute separately from the other unions. The nurses’ unions called off their strike after a three-week walkout when the government threatened legislation to force them back to work. The nurses have switched tactics and their unions now call for mass resignations instead of strikes.

Municipal workers and teachers were successful in winning an improved pay offer that will catch pay up by 1% per year over five years. These gains for welfare officers, teachers, and others, would still fall well short of the estimated 10-12% necessary to match private-sector salaries and fight the flow of workers away from these areas. But with the nurses’ continued rejection, more strikes are now likely after the school holidays end in August.

After two and a half years of working under the difficult, stressful circumstances of COVID, public sector workers are ready for action. Indeed, thanks to workload and pay issues, they have been ready to strike for years. But OAJ’s conservative leadership has preferred to play the role of a “service union” instead of representing its members effectively. This spring saw the election of a new board for the union that, while hardly radical, sought to prove that it has continued worth to its members. Members readily answered the call in early May, with 90-95% striking in most workplaces.

Even then, hesitancy and the unwillingness to form a truly united front have hampered the unions’ fight. The teachers’ tactics were telegraphed by weeks of localized two-day strikes. Meanwhile, the nurses’ decision to forgo strikes and coordinate with JHL and OAJ, can only be viewed as a mistake–especially as those nurses most likely to heed the unions’ call to resign will be the most dedicated and established representatives. The despicable threat of a new law forcing nurses to work should have been challenged–both through legal means and through outright defiance by all public workers in a public sector general strike.

Nevertheless, three years of Social Democratic-led government has exposed deep breaches of the unions from their traditional parties. Education minister and Left Alliance leader, Li Andersson, would not give even words of support to the teachers. Labor minister and Social Democratic MP, Tuula Haatainen, used her cabinet powers to push the JHL and OAJ strike back two weeks, claiming the proposed dates were “too disruptive.” The whole government, after weeks of arguing about public finances, could not stand the strain of the unions’ demanded pay raises, yet they found billions of euros for supplementary defense spending just days after OAJ and JHL signed their pay deals!

It is clear that unions and their traditional parties now stand on opposite sides of a fundamental social struggle. The SDP and Left Alliance are united with the rich in opposing even mild improvements in workers’ conditions. Finland’s trade unionists and socialists–organizers for democratic workers’ control of the economy–should launch a project for a new mass party of the working class, an internationalist and fighting force against capitalism and all forms of oppression. 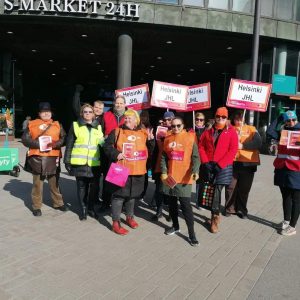