Despite it being a cold, dark evening, an estimated 1,500 local people attended a protest meeting in Enniskillen, Co. Fermanagh, on Friday, 2 December.  They came to oppose the announcement, made in October, by the Chief Executive of the Western Health and Social Care Trust (Northern Ireland) that emergency general surgery was likely to end at the South West Acute Hospital (SWAH), which is located in Enniskillen. Around 700 people attended the indoor meeting in the town’s leisure centre Forum, with an overflow meeting of at least 500 in the car park.

A leading figure in the campaign against the cuts is Cross Community Labour councillor, Donal O’Cofaigh, who is also a Militant Left supporter (CWI Ireland). Donal campaigned during last May’s Assembly elections in Northern Ireland opposing the loss of emergency surgery at SWAH. His support was largely built on the campaigning work done under the banner of Fermanagh Save Our Services and the trade unions.

Donal said of last Friday’s meeting: “Massive crowds turned up for the Save Our Acute Services at South West Area Hospital (SWAH) rally in Enniskillen. So much so, that they swelled way over the fire limit in the Forum and we were forced to conduct two meetings, one indoors and one out, due to safety concerns. I was very proud to be able to address them.

“The politicians, trust bosses and department heads have been left in no doubt as to the determination of people here to defend our SWAH and to defend our NHS services. Well done to all involved.”

Other speakers at last Friday’s mass meetings in Fermanagh included Pádraig Mulholland NIPSA Deputy General Secretary (personal capacity). NIPSA is the largest trade union in the North. NIPSA members in the health service will be taking strike action, along with UNISON union members, on Monday 12th December, across Northern Ireland.

Militant Left supporters handed out thousands of Cross Community Labour Alternative leaflets during last Friday’s protest meetings in Enniskillen and also distributed the leaflets through hundreds of doors in the town, earlier in the day. Copies of Militant Left newspaper were sold out on the night. 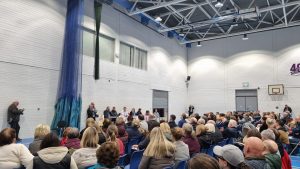 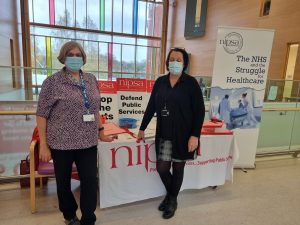 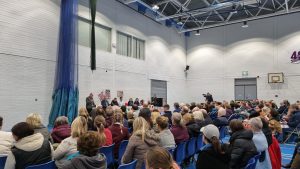 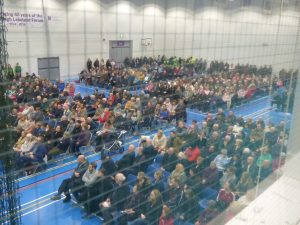 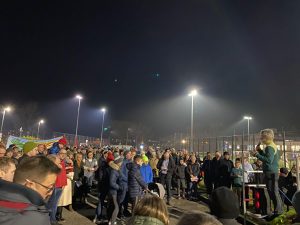 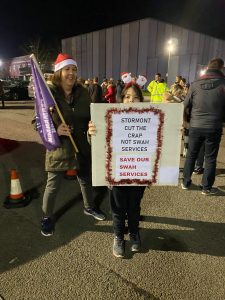 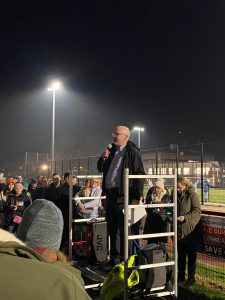 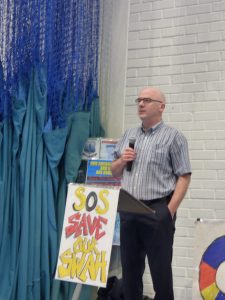 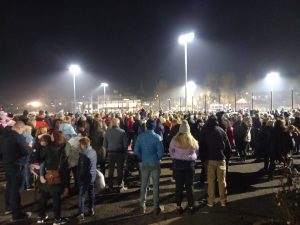 Below is an article on the SWAH cuts from the current issue of Militant Left, the newspaper of the CWI in Ireland:

In October the Chief Executive of the Western Health and Social Care Trust announced that emergency general surgery was likely to end at the South West Acute Hospital (SWAH) in Enniskillen.

Such a move would inevitably undermine the sustainability of a whole range of acute services at the hospital – starting with anaesthetics and including maternity, stroke and cardiology.

Those injured in car accidents, suffering post-operative bleeds or needing emergency C-sections will have to be driven by ambulances past the SWAH and onwards to Altnagevlin or the already overcapacity Craigavon hospital.

Either option will necessitate journey times far in excess of the ‘golden hour’ identified as critical for successful post-operative outcomes.

The Health trust boss blamed consultant staffing difficulties for the decision. At its root, however, it is driven by the privatisation agenda that has undermined rural healthcare provision.

The proliferation of private-for-profit specialist medical treatment centres – funded at the expense of front-line NHS services – mean few surgeons want to practice in rural hospitals preferring to be based in urban settings where they can service the highest number of paying patients.

The threat to SWAH, therefore, represents the culmination of many years of Stormont policy. For two decades, every strategic review and blueprint has reiterated the same policy demand: the closure of small, rural acute hospitals. All five of the Stormont establishment parties are fully signed up to this agenda; hence, their ludicrous demand that ‘politics be taken out of healthcare reform’.

Indeed it was openly stated in the first recommendation of the 2014 Donaldson review that demanded that ‘politicians and the community’ accept in advance the recommendations of an ‘expert’ group of (private-for-profit) medical professionals on the location of acute services in Northern Ireland.

The same logic was central to the next reform blueprint – commissioned by the DUP, conducted by private sector medical expert Raphael Bengoa, and adopted by Sinn Fein in 2016 – which set out how services would be ‘restructured’.

Stripped of its aspirational words about inclusive ‘co-production’ processes, the Bengoa review was little more than a blueprint for privatisation and cutbacks to rural healthcare provision.

The political crisis – meaning no locally accountable Ministers – makes this the perfect time for the political establishment to close services and push the agenda of for profit healthcare. Cross-Community Labour councillor Donal O’Cofaigh campaigned on the May Assembly election precisely on grounds of opposing the loss of emergency surgery at SWAH.

Indeed his support was largely built on the campaigning work done under the banner of Fermanagh Save Our Services and the trade unions.

The future of acute services at SWAH can only be won if the colossal waste on for profit private provision is ended. Campaigners in Fermanagh are once again at the cutting edge of the fight for a publicly-owned and publicly-delivered NHS.