The Committee for a Workers’ International is a global organisation of workers, young people and all those oppressed by capitalism and imperialism which is fighting to building a socialist world. The era of neo-liberal capitalism and globalisation, which has dominated the policies of the ruling classes for decades, resulted in unprecedented inequality and exploitation. The richest 8 people on the planet now have the same wealth as the poorest 50% of the world population.

Now a new era has begun. Capitalism is in turmoil, within and between nations there is polarisation and growing questioning about the future. Increasingly working people face regular crises, mass poverty, exploitation, environmental deterioration, wars, conflicts and attacks on democratic rights. These hallmarks of capitalism today can only be ended through a fundamental change. This can only come about through by working people coming to power. What is required are governments run by and for working people that break with capitalism and begin the democratic planning of the economy based on the nationalisation of the major multinational companies and financial companies. This would be the basis for creating a socialist planned economy, a system that will use new technology and human skill to benefit the mass of the population and not the profits of the richest 1%.

The CWI fights exploitation, racism, repression of democratic rights, all exploitation and discrimination based on gender, sexual orientation or race, and national oppression. We fight for the unity of all working people in a global struggle against capitalism and imperialism. We strive to help construct democratic and combative trade unions that serious act to defend and improve the conditions of workers. The CWI supports building mass parties of the working class to unite all working people in a struggle to defend their interests and oppose capitalism. We stand opposed to collaboration with capitalist classes in the name of ‘national unity’. We argue that the working class needs to stand politically independent from all ruling classes and pro-capitalist forces. We struggle to build Marxist parties with a revolutionary socialist programme to defeat capitalism in each country and internationally. Struggles begin in individual countries but our ambition is a socialist world.

The CWI is organised in Europe, North and South America, Asia and Africa in a common struggle to defend the working class and oppressed and, above all, for an international socialist alternative. On socialistworld.net you will find our programme, comment and witness the struggles of the CWI and working people throughout the world. We appeal to those who agree with the fight for a mass socialist internationalist alternative to capitalism to join us in this struggle.
If you are interested in joining the international struggle for socialism and becoming a member of the CWI or want to find out more then fill in the form here –Become a supporter.

The CWI offices in London and our affiliated organisation or party in the country you are in will then contact you. find out more –CWI Worldwide

If currently there is no CWI organisation or party in your country we will give you help and advice on how to set up a group amongst your friends, workmates, or fellow students who can affiliate to the CWI. 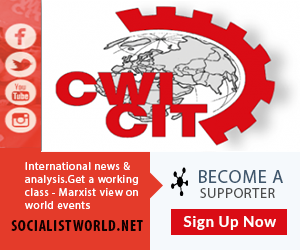